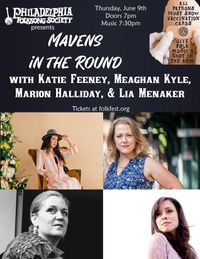 Mavens in the Round @ PFS

Mavens in the Round @ Philadelphia Folksong Society - Come experience a unique night of incredible songs, storytelling and collaboration in an intimate listening room environment. Marion Halliday will host an in-the-round concert showcasing some of the best female-identified songwriters and storytellers of our region. Details below:

KATIE FEENEY Drawing comparisons from Adele to Janis Joplin, Katie Feeney is a versatile and dynamic singer and bandleader in Philadelphia, PA. The powerhouse contralto fronts 8-piece funk rock band You Do You and moonlights as cosmic country crooner, Roberta Faceplant in addition to several cover projects.

MEAGHAN KYLE Meaghan Kyle had one of Philadelphia’s best Americana bands with Jess McDowell, Marion Sharrow: No Good Sister from 2014-2019. Born out of a mutual attraction to all things Americana, No Good Sister’s dynamic songwriting and timeless three-part harmonies put them in front of audiences at venues like World Cafe Live (both in Philadelphia and Wilmington), The Bitter End (NYC) and Club Passim (Boston). In 2014, they were voted Best New Artist at WSTW’s Hometown Heroes Awards and earned a coveted showcases at Northeast Regional Folk Alliance (NERFA) and the iconic South by Southwest (SXSW). Their single “Little Bit Crazy” from their self-released, self-titled EP (2014) was in regular rotation on WXPN 88.5 FM, and on the airwaves as far as the UK. Now, Kyle is sharing her own music through her signature voice and sound.

MARION HALLIDAY Marion Halliday, a native Kentuckian now splitting her time between Louisville and Philadelphia, has been a professional singer much of her life. In 2016, she turned to songwriting and performing her own music, an urban influenced modern folk concoction that reflects her bluegrass and bourbon-infused roots. Marion’s first solo full-length album, released July 2019, RINGS AROUND SATURN, debuted at #3 on US/International folk radio charts; the album also made the FAI listing of Top Albums for 2019. In the last three years, Marion has appeared as a featured songwriter on many stages and festivals across the US and has garnered other accolades including being named runner-up for Best of Philly Live Performer.

LIA MENAKER With expressive, soulful vocals soaring over a mix of ambient pop, electronic, and alternative R&B sounds, Lia Menaker’s music moves beyond genre to sit in a world of its own. Dubbed “Noirtronica” by WXPN radio, Menaker’s music calls back to jazz vocalists like Nina Simone and Amy Winehouse, while also experimenting with space and percussive electronic elements reminiscent of Bjork and Portishead. Menaker's music has been played over radio stations across the east coast, including Philadelphia's iHeartRadio (Alt 104.5) and NPR (WXPN 88.5), who consequently included Menaker in the “2020 Best of Philly: Pandemic Edition.” In 2021, he wrote the score for Welcome to Campfire's danceplay and subsequent film "Subject". Menaker has performed in 50+ cities around the country. She balances performing (locally and online) with producing and vocal coaching through her home studio.